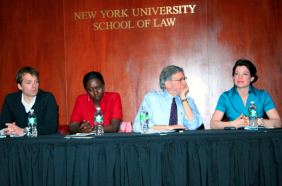 MIRACLE CORNERS MARKS THE 15TH ANNIVERSARY OF THE RWANDAN GENOCIDE

Open dialogue on challenges facing survivors in Rwanda today comes during Genocide Prevention Month, as survivors around the globe mark the major anniversaries of six genocides in April 2009

NEW YORK, April 20, 2009 – Miracle Corners of the World (MCW) demonstrated its continued support for genocide prevention yesterday by organizing a panel discussion on post-genocide Rwanda. As millions around the world gather this month to remember the victims and survivors of the Rwanda genocide, the three distinguished panelists spoke about issues of denial, memory and justice fifteen years after the 100-day tragedy that, according to Rwandan government estimates, led to the killing of more than one million Tutsis and moderate Hutus.

The event, which was moderated by Sarah Nadeau, Deputy Director of the non profit Council for Prejudice Reduction, was organized by Jacqueline’s Human Rights Corner, a genocide prevention program founded by MCW fellow and Rwanda genocide survivor, Jacqueline Murekatete, under the umbrella of MCW. It follows a gathering memorializing the Rwanda genocide earlier this month at the Church Center at the United Nations. Entitled “Remember, Reflect and Respond,” the commemoration featured survivor testimonies and multi-faith prayers.

“MCW is organizing these two events to remember what happened in Rwanda, and to honor the millions of lives lost to genocide both in Rwanda and around the globe,” said Murekatete. “As survivors of genocide, we must not let the world forget what happened in Rwanda, but we must come together to help those populations that are currently at risk so that our shared history does not continue to repeat itself.”

Dr. Gerald Caplan, a leading Canadian authority on genocide prevention, spoke about the prevalence of denying genocide and why it happens. He said that denying the genocide of the Tutsi in Rwanda is morally equivalent to denying the Holocaust. “We can never trust the government to fight the fight against the deniers unless we press and press and press. Everyone needs to press… press our leaders to stand up and say that these [denials] are lies.”

Chantal Kayitesi, Rwanda genocide survivor and activist, spoke about the welfare and solidarity of survivors. “Survivors continue to be targeted. The reason they’re being killed is because the deniers want to continue the ideology and to finish the job,” she said. “Survivors are the sole witness to the crime, so if they kill them, no one will tell the world what happened.”

Kayitesi concluded that civil society could help prevent future genocides and improve the lives of survivors by providing survivors with security, healthcare, education and economic assistance so they can be “witnesses and bring justice.”

Dr. Jens Meierhenrich, Harvard assistant professor and an author on genocide, memorializing and justice, discussed the hundreds of “sites of memory” across Rwanda, highlighting how “memorials provide a means to commemorate together.” His remarks and pictures of different memorials highlighted how survivors cope with constant reminders of the genocide, and illustrate how if people work to preserve the memorials, “we cannot simply forget or deny these atrocities and plead indifference.”

Meierhenrich bases his research on visits to more than 130 memorials. “I want to tell the stories of the memorials to draw attention to the status of the memorials in order to raise awareness of them, help remember, and to raise money and support for their preservation.”

With over 300 attendees, both events generated significant awareness of the 15th anniversary of the Rwanda genocide and the current challenges facing survivors living in Rwanda. The events also recognized Rwandans’ commitment to build a peaceful and prosperous future after one of this century’s most tragic events.

About Miracle Corners of the World (MCW) Miracle Corners of the World (MCW) is a non-profit organization that empowers youth to be positive agents of change, to improve their lives and contribute to their communities. Based in New York, MCW serves youth worldwide through leadership training, community development, oral healthcare, and partner initiative programs. For more information on MCW, visit www.miraclecorners.org.

About MCW’s Jacqueline’s Human Rights Corner Established in April 2007 as an MCW partner program, Jacqueline’s Human Rights Corner works with educational institutions, businesses, NGO’s, and individuals interested in genocide prevention to raise awareness of the crime of genocide in a wide-range of educational forums; and to help survivors rebuild their lives and their country by establishing an MCW community center. For more information, visit http://www.miraclecorners.org/programs_partner_jacqueline.htm