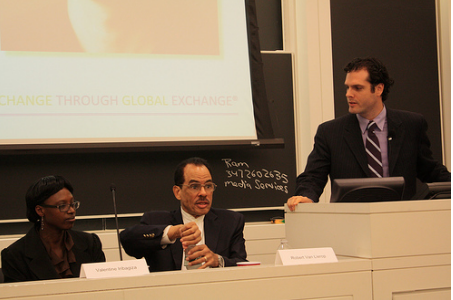 Jacqueline Murekatete, an MCW fellow and founder of MCW’s genocide prevention education program, called on the audience to “ensure that survivors’ stories are told and that the people who are denying the genocide are challenged.” She continued, “There are many ways you can take action. You can help survivors in Rwanda in need of services; you can support efforts to bring the people who committed the genocide to be brought to trial; and you can spread the stories of survivors to others.”

Following a moment of a silence, the program opened with an excerpt from PBS documentary Valentina’s Nightmares and the testimony of Valentine Iribagiza who was nine years old when the killings broke out across Rwanda, leading to the deaths of more than one million people in one hundred days. Among the dead were Iribagiza’s parents, two sisters, and three brothers.

In 1994, when the violence broke out, Iribagiza and her family sought shelter in a church in their village. Forty-three days later, she and her brother Placide survived by hiding among the bodies, pretending to be dead. Iribagiza survived without any food or water; her fingers were beaten and broken and her head was sliced open by a machete. She was convinced that the world had come to an end.

Iribagiza spoke of a “second genocide,” referring to the ongoing struggle of survivors in the aftermath of the 1994 Genocide Against Tutsis in Rwanda. “I was in a hospital near death for six months, and I couldn’t smile and I couldn’t talk for a long time,” she said. “I was and still am confused by why it happened, but many things have changed since then. Today, I know I am stronger and I know I am a beautiful girl, no matter what happened.” Now Valentine lives in the U.S. and is a college student focusing on social services. She continued, “When I think about the future, I want to educate people about the genocide and help those who struggle.”

Taylor Krauss, an independent documentary filmmaker and founder of Voices of Rwanda, spoke about the importance of collecting and listening to survivors’ testimonies. “We need to continually remind ourselves of what our role was as an international community in the 1994 genocide,” he said. “Survivors want to tell their stories and I want to make sure that the space for them to share these stories exists.”

Dr. Zachary Kaufman, author of After Genocide: Transitional Justice, Post-Conflict Reconstruction and Reconciliation in Rwanda and Beyond, spoke about the circumstances behind and politics of creating the International Criminal Tribunal for Rwanda, including the complicated involvement of the U.S. and the unique experience of Rwanda, where survivors live next to perpetrators and where the government is responsible for serving everyone, regardless of their involvement in the genocide.

Robert Van Lierop, former high level advisor on Justice, Accountability, Truth and Reconciliation for UN/African Union Mission in Darfur (UNAMID), moderated the event. “Whenever someone is murdered, it is a crime against all of us,” he said. “We all have to see ourselves as Tutsis, just as we need to see ourselves as Jews and Armenians and others who died because of genocide,” he said in his opening remarks.

The program concluded with a slideshow with photographs of individuals who died in the genocide, including a number of family members of the survivors present at the event. The final slide read, “For the dead and living we must bear witness,” a quote from Elie Wiesel, who received the 2012 MCW Lifetime Achievement Award earlier this month.

About MCW (Miracle Corners of the World) MCW (Miracle Corners of the World) is a non-profit organization founded in 1999 with the vision of Local Change through Global Exchange®. Our mission is to empower youth to become positive agents of change in their communities. Based in New York with affiliates in Africa, MCW offers the following programs: Leadership Training, Community Centers and Oral Healthcare Improvement, as well as Partner Initiatives (MCW Jacqueline’s Human Rights Corner). For more information visit, www.mcwglobal.org. 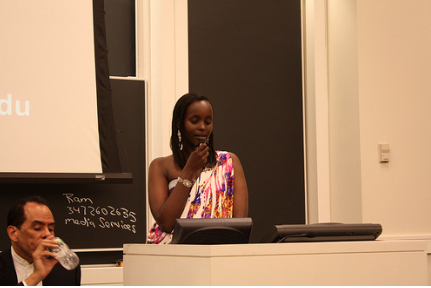