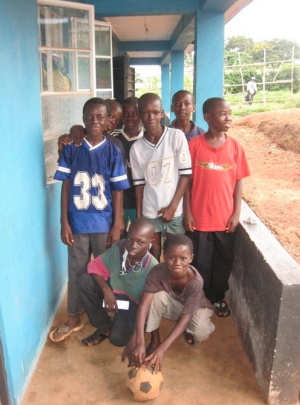 “The MCW community is very excited about the recent developments at the youth resource center,” said Eddie Bergman, MCW Executive Director. The team is making great strides in utilizing the center to empower Sierra Leonean youth!”

Sierra Leone, which is recovering from a ten-year long civil war, is the lowest ranked country on the United Nations Human Development index. Much of the West African country’s infrastructure, such as water systems, power grids, roads, schools and businesses, was destroyed during the war. Unemployment, illiteracy and disease, coupled with corruption and poverty, are current challenges facing the population and the democratically elected government.

Since 2005, MCSL has worked closely with the community in Kissy to address the needs of the community and to find ways to alleviate some of the strain in the eastern part of the city, which was hit the hardest during the war.

Working with volunteers from the Kissy community, an MCSL Leadership Team conducted a two-month needs assessment and prepared a programming development plan.

“I am inspired by the initiative and hard work of all of MCSL’s volunteers and team members, said Amanda Blount, an MCW Fellow based in Sierra Leone for the next ten months. “The past two months have been incredibly exciting in Freetown.”

The program was launched with a new Youth Fitness and Athletics program.

Kamara and another team member named Charlie Kamara designed the new health and well-being program. The program was launched with yoga and karate classes, with more than fifty youth registering for the program on opening day.

“Several youth from Kissy were so enthused about the program that they offered to volunteer their time to help us complete the registration process,” said Harry Gbetuwa, MCSL Leadership Team member.

Gbetuwa is currently organizing a nutritional awareness program, which aims to help combat malnutrition and vitamin deficiency among the youth, who lack knowledge about healthy eating habits, in the center’s cafeteria.

In September, MCSL will offer a peer-mentoring and tutoring program for elementary and high school students beginning in early September. Peer tutors from the Leadership Team, alongside community volunteers, will facilitate the program three times a week.

“We hope to reach a large population of youth who suffer from over crowded schools and inaccessibility to support and tutoring from their school teachers,” said Philip Bangura, MCSL volunteer.

In October, MCSL plans to launch additional programs, beginning with a cultural dance and drama program for women, who lack educational and economic opportunities and access.

“The cultural dance and drama program was inspired by the women of the Kissy community who we [the Leadership Team] interviewed during registration for the Fitness program,’ said Kamara. “They expressed interest in the dance and drama aspects so we decided to design a more focused program just for them. It will be the first of its kind in Eastern Freetown.”

Plans are also underway to develop a “football” [soccer] league, followed by a basketball league.